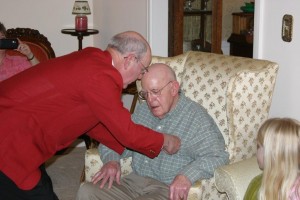 Joseph Marion Brown Jr., 79, of Roanoke, died Thursday, October 25, 2012. He was born on July 1, 1933, in McCormick, S.C. He was a graduate of the University of South Carolina and an Army Veteran of the Korean Conflict. He retired after 33 years of service as a territory sales manager with Reckitt and Coleman, formerly R.T. French Company. He has been a Mason and a Shriner for over 50 years. He is predeceased by his parents, Joseph M. Brown Sr. and Annie Lucile Keown Brown; and his wife, Mary Jane Royall Brown.
He is survived by his daughter, Anne Royall Brown Neff and her husband, Mitch; son, Joseph M. (Trey) Brown III and his wife, Angela; grandson, Joshua Marion Brown; and granddaughters, Shelby Anne Brown and Reagan Hope Brown.
A Memorial Service was held at Raleigh Court United Methodist Church, on Saturday, October 27, 2012, at 11 a.m. with the Rev. David Tanner and the Rev. James Reynolds officiating. The Worshipful Master and brethren of Pleasants Lodge #63 AF&AM were in attendance and Masonic Rites were performed. Interment will be held at a later date in McCormick, S.C. In lieu of flowers, memorials may be made to Raleigh Court United Methodist Church, 1706 Grandin Road, Roanoke, VA 24015-2816; the Parkinson’s Foundation or to Gentle Shepherd Hospice. The family will receive friends on Friday, October 26, 2012, from 4 to 7 p.m. at Oakey’s South Chapel, 540-989-3131. Online condolences may be made at www.oakeys.com.